I’m a full-time writer and photographer based in Pontypridd, south Wales. I studied Zoology at Cardiff University before becoming a Biology, Science & PE teacher. I’ve always lived in Wales except for a short spell in Kenya in 1993-94, where I taught science and sport as well as finding time to work in Nairobi National Park as a volunteer. As the years drifted by I found myself moving towards the more ‘artistic’ subjects, namely literature and photography.

I write content for and still maintain many web sites. I’ve worked as a web producer for the BBC Wales Scrum V fanzine, have run four hugely successful rugby sites with Rivals.net and used to write a newspaper column for the Pontypridd Observer.

I can be quite outspoken on local issues, especially where I see inequality, and feel it is a writer’s duty to constantly challenge authority. I’ve got into trouble in the past because I used to run the infamous ‘Ponty Town Online’ message board – a haven for free speech which certain politicians dislike and local people love. My literary work has been published in an array of magazines and web sites all over the world, although the ‘self-appointed’ literary establishment in Wales seem to shun my work.

I haven’t given up dreaming of being a billionaire philanthropist, not even when my first offspring came along, but may have to settle for an easier life writing poems in the woods. It’s safer that way!

In 2005 I cycled from Lands End to John O’Groats, for Ty Hafan. I love to travel when I can afford it and have photographed wildlife on numerous continents. I’m also a keen walker and helped lead a school expedition to Ecuador, where students visited Cotopaxi volcano and lived in the Amazon jungle with the native inhabitants for a few weeks.

In 2007 I set up and organised the first ever Welsh Poetry Competition, an international poetry competition aimed at encouraging the wealth of creative writing talent that everyone knows exists in Wales but currently languishes in the doldrums thanks to the reluctance of the ‘arts business’ to embrace grass roots projects and offer opportunities to new writers, especially in the valleys. The contest is the biggest in Wales.

In 2009, encouraged by famous Welsh writer, environmentalist and activist, John Evans, I published my first book – Layer Cake, a collection of poetry that spans 24 years. I was hoping to get rid of half a dozen but ended up selling over 200 copies! My second book – Urban Birdsong, contained the runner-up short story in the Rhys Davies Competition. In 2011 I published Sawing Fallen Logs For Ladybird Houses, which combined poetry with photography. 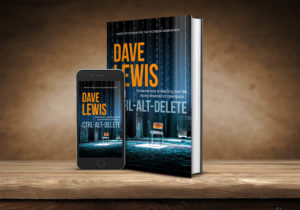 To celebrate the success of the poetry competition I decided to edit an anthology of the The First Five Years – a book with 100 winning poems inside.

Also in 2011 I completed my first novel, the critically-acclaimed, ‘Cymru noir’, crime technothriller – Ctrl-Alt-Delete which managed to sell over 1000 copies (downloads) on Amazon kindle, although a few zeros on the end would have been better.

My first ‘modern’ Haiku collection was released in 2012 followed by a sequel to my first novel, Raising Skinny Elephants the year after.

In 2013 I also finished my next poetry collection, Roadkill, whose title poem is a work that had been gnawing away at me for over thirty years.

After getting made redundant from Gartholwg Lifelong Learning Centre in 2014 I started a self publishing business – Publish & Print, to help those people who find difficulty getting into print. The company can help you publish a paperback or an e-book with Amazon Kindle. I also decided I would try to be a full-time writer.

Also in 2014, I published my first non-fiction title – Photography Composition, an introductory guide to improving composition and taking better images, which quickly became a best-seller on kindle. 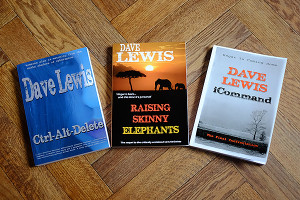 In September 2015, after seven hard years of research and writing I finally completed my ‘Hagar’ trilogy with the release of the third novel – iCommand. Someone tell Danny Boyle to read them so I can secure a film deal for the three books. I’ve cheekily ‘suggested’ a music soundtrack for each book / film as well.

As I get bored easily, a month later I finally published my first travel diary, ten years after cycling the End to End challenge with a friend. This short, but hopefully funny, account quickly shot into the kindle best-sellers charts for cycling e-books!

In March 2016 I published a dark poetry collection – Reclaiming The Beat. This contemporary work deals with life, love and death in an ever-changing modern world and has received great reviews by world famous Welsh novelist Catrin Collier and award-winning poets Sally Spedding and Kathy Miles.

In September 2016, after cycling around Wales for two weeks, I tried to encourage other riders to do the same thing by creating ‘Wales Trails‘, a LEJOG-lite challenge where cyclists do a loop of the Principality and discover more about our ever-diminishing history and culture. I received loads of support for this endeavour from individuals, bike shops, B&Bs, pubs, websites, other cyclists and many other cycling groups but I got no support whatsoever from Sustrans, the Welsh Assembly or Literature Wales. Take what you want from that.

The second anthology, Ten Years On, is also produced in 2016 after ten amazing years of the poetry competition. 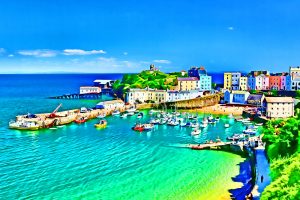 In October 2017 I released a second photographic e-book – Basic Photoshop and also finished my first ‘self-help’ book, Happy, which I wrote to try to overcome my constant fight against depression.

April 2018 saw the release of Going Off Grid – a new poetry and photography collection. Dealing with digital capitalism, information overload, love and depression this work has been positively reviewed by award-winning poets Sally Spedding and Chrys Salt MBE. Welsh singer / songwriter Andrew Davies has likened my opening poem, (Diet), to T.S. Eliot’s ‘The Waste Land’, which was quite some compliment! I was also awarded a finalist medal in The Wishing Shelf awards 2018.

In February 2019 I created Writers of Wales, an A to Z database of important Welsh writers. A huge undertaking and ongoing project that will no doubt take up far too much time but someone had to do it. 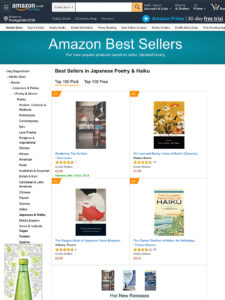 In October 2019 I published another poetry collection, Scratching The Surface, which I was absolutely over the moon to have one of my ‘poetry heroes’, the great Brian Patten, send me a short review!

The kindle version also got to the #1 Amazon Best Seller position in two categories which was awesome.

January 2020 sees the launch of the international Poetry Book Awards – a new project that seeks to help and encourage self published poets, small presses and indie authors that have been ignored by the bigger traditional publishers.

A number of small publishers have shown interest in producing a ‘Selected Works‘ of my poetry and this is certainly a project that I intend to pursue in the future. In the meantime why not download a FREE e-book of some of my poetry.

In November 2020, in order to offer people an alternative to Amazon I setup the Welsh Book Shop to help support local bookshops and small independent book sellers.  I shall be adding more Welsh books as time goes on.

November 2020 also sees the release of my fourth novel, The Welsh Man – a ‘Cymru noir’ thriller set in Wales and London. I did apply for a Literature Wales bursary for this novel but was once again turned down by them.  Not a great surprise as I’ve had award-winning projects turned down by them in the past and it seems they only give money to their friends.  Wouldn’t it be great if this novel was turned into an award-winning film?  Now there’s a thought…

Also in 2020, I was lucky enough to work with great Welsh poet, Mike Jenkins, on his new book – Anonymous Bosch.  Mike wrote the poems and I did the images.  The book was published by Culture Matters, edited by Mike Quille, in 2021.

I’ve also got an idea for a 4th ‘Hagar’ novel… watch this space!

My books can be bought direct from the publishers, at the numerous book fairs I attend throughout south Wales, this web site, from all good book stores and are also available for download with Amazon Kindle and other platforms.

All my books are also available to review on Goodreads, e.g. Ctrl-Alt-Delete (see below)

As well as being a writer I’m also a keen photographer. I first started taking photographs with a SLR in 1986 and my main interests are travel, wildlife & urban decay. A strange mix you might say. 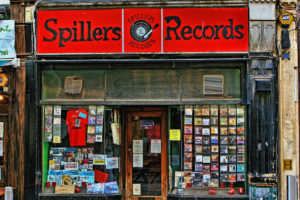 I like to combine poetry and photography and also design my own book covers. I’ve got over 30 years experience, am Adobe Certified in Photoshop and InDesign and have also lectured digital photography & Photoshop for many years.

Most of these images can be purchased online as fine art photographic prints or canvas prints. I also produce small handmade A6 cards of many of my photos which are very popular when I display them at various book fairs, craft fairs and exhibitions around south Wales. I also sell my images to individuals and businesses via a number of stock photographic agencies.

In May 2010, after a few years of teaching photography in Church Village, south Wales, I decided to start the Gartholwg Camera Club, which seeks to encourage and nuture local photographers. The group grew from just a handful of photographers to over 80 members in just a few short years. There are now two groups, who still meet up, most weeks, in the ‘real world’ and also have a Flickr group in the ‘not so real world’.

I only have a small selection of my photographs on this site and they don’t include most of my ‘older’ film images from Kenya, South Africa, Ecuador, Zimbabwe, Tanzania, India, Canada, Indonesia and various other travel destinations.  With a bit of luck I’ll manage to revisit some of these awesome places and add some new images over the coming years.

In October 2014, I published my first non-fiction book – ‘Photography Composition‘ – an introduction to the rules and principles of good photographic composition. This e-book is available for download from Amazon and contains over 60 images.

In October 2017 I released a second photography e-book – Basic Photoshop.

“I taught myself how to use a SLR when in University. I bought a Pentax P30 way back in 1986 and didn’t have a clue. This was before the Internet of course and I just experimented with shutter speeds and apertures until I worked out what they did. I took shots with different settings then tried to remember what aperture I took them on while waiting weeks for the films to be developed. It was a very slow learning curve! I then moved on to a Canon 1000 with some kit lenses before I upgraded to an old secondhand Canon 5, which was an awesome camera. I used mainly Fujifilm 200 and the odd roll of Kodachrome 64.

“A few years later I bought a Fuji X100S, a small compact camera with a fixed 28mm lens (35mm with crop factor) which soon became my main camera as the images were so sharp.

“However, disillusioned by the constant ‘strive for perfection’ in modern photography, especially with the aid of computer software I decided to give away my DSLR camera (the Canon 50D) to my daughter, take a few years off from photography and try to enjoy the things I used to photograph but without a camera dangling from my neck.

“I did promise myself that if I ever went back to Africa I would buy a decent zoom lens though. So flights booked I sold my other lenses and bought a Canon 7D Mk II and a 100-400mm lens. Click the links below to see some of the results, lol.”

To see some of my images just click below or use the various drop-down links from the menu above:

To connect with me just use the links below: