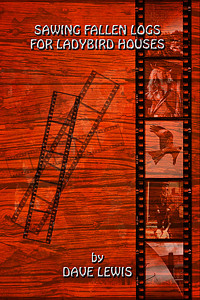 My third book is a poetry collection divided into five sections. Many of the poems should be read in conjunction with photographs taken during the writing of the book. To view some of these images click here.

The idea was to document a time and a place within Wales by using poetry and photography, similar to what John Evans had achieved with Black Harvest in 1992. I applied for a bursary from Literature Wales to help towards achieving my goal but was unsuccessful due to the fact that they gave money to 19 already published writers instead! After this disappointment I decided not to ‘bother’ them with my art anymore and do everything my own way.

‘From the first eponymously titled poem, we realise that Dave Lewis’s work possesses an energy and freshness that lifts his imagery and empathy way above the work of many less ambitious poets.

The element of surprise in each poem is even more startling coming as it does from such uncluttered writing. Last lines are an example, while phrases such as ‘trees as tall as ships’, ‘a severe lack of hares’, ‘the brittle grass of misunderstanding…’ will surely enhance the readers’ own perceptions of the world around them.

This collection’s structure too, works well under its five separate headings, and the diverse forms used in several poems adds visual variety. A wonderful read. Buy it!’ – Sally Spedding

This book can be purchased direct from the author as a paperback for just £5.99 (free postage) or as an e-book on Amazon kindle for £4.99 (which includes images not available in the paperback).

his Dad’s cancer
or his younger brother
not once, during the best years of my life

he fixed cars
with a pipe slowly smoking

a magician with gauges and valves

he drank small amounts of beer
most nights
talked of governments,
jays, woodpeckers and herbs

he once caught a 200lb conger
he threw it back, no big deal

walked his dog over a hundred years old

until she died too

he never once mentioned it, but we noticed

through fleeting visits
he just smiled, understood us like Buddha
he gave without receipts
or IOUs

would it have mattered
if we’d found the tablets in his drawer
or deciphered the consultant’s scrawl
papered vaguely on the wooden table?

he wasn’t expecting guests, I guess

and then one random Sunday,
memories of mountains
and meadows
and fox cubs
and bullfrogs,
warm summers
and the scent of tobacco
went out

off the rocky coast,

the wind grabs my gaze

and hauls me off

past Ireland and America

while towing in my

‘Sit down Williams you liddle shit!’

through her tongue and teeth.

The day had started well

the slappers quiet in the corner,

and the sun glistening

on the frost covered grass

outside the Biol. lab.

as we lapped the desks

The rabbit headed for the door

he bolted out into the yard

into the headlights of the morning sun

screaming up the road

a car did an emergency stop

as he sprinted past Legges shop.

Two days later he was back,

sat down at the front

calm as a sea

the slappers in the corner told me

It was then I noticed the good kids,

and Ann Marie’s hand crept down

and she winked when I started talking about

Quite early one morning

a black and white

‘From the moment you pick up a copy of Sawing Fallen Logs For Ladybird Houses, you realize you are holding a piece of art. Published by Ponty Press earlier this year, this work is gutsy, perceptive and experimental. Most of all it allows Dave Lewis to take us on a journey into all those nooks and crannies of life and love that most of us overlook. His keen eye and excellent usage of wit make this book one that I will come back to time and time again. For instance, in Outside the museum with Warren, Mr Lewis uses language and formatting so skilfully that we are instantly engaged in this encounter. Lines such as ‘we held the moments as strong as a whale’s heartbeat’ grab the reader and refuse to let go. Throughout the book, Dave Lewis shares intelligent and comedic metaphoric snippets that not only fill the backdrop, but also carry us along with him frame-by-frame. Like any good director, Mr Lewis allows his audience to look through the camera just enough to make them want more. In Opium, his repetitive use of ‘dab, dab’ actually summons the scent up, which is exactly what authors hope for and readers demand. The poem is creative, as is the entire book, but, more than that, it stimulates us on several levels. Through exaggeration and sarcasm we see situations most of us can relate to all too well as in the case of A fly in the ointment, one of several pieces that made me laugh and nod my head in total agreement. Travel Text is a clever reminder of how we’ve shortened our conversations to such an extent that we may lose the ability to truly communicate. Poems like Car Accident are so potent that you might miss how cleverly the author has used understatement to grab you by the gut. Train Lines provided me with a first-class ticket to a perceptive ride through the countryside I wouldn’t have missed for the world. I have read each of the poems in this book countless times and each time was given a richer taste of Mr Lewis’ fantastic feast. His lines are smooth and flow like ale on the palate on a hot summer day. I found this book refreshing and tantalizing. Even in his Row of trees, we’re taken immediately to the scene. ‘film grain, harsh light / the black and white of winter / rain rips skies.’ My heart was broken by Hospital bed. The stark reality Mr Lewis painted left me breathless. Throughout the book readers will ride a rollercoaster of rich language, clever insights and creativity. And when they finally come to the end, they’ll join the queue to ride again. Just remember, the queue starts behind me.’ – Jolen Whitworth for Gold Dust Magazine

‘From the first eponymously titled poem, we realise that Dave Lewis’s work possesses an energy and freshness that lifts his imagery and empathy way above the work of many less ambitious poets. The element of surprise in each poem, however short, is even more startling coming as it does from such uncluttered writing. Last lines are an example, while phrases such as ‘trees as tall as ships’, ‘a severe lack of hares’, ‘the brittle grass of misunderstanding…’ will surely enhance the readers’ own perceptions of the world around them. This collection’s structure too, works well under its five separate headings, and the diverse forms used in several poems adds visual variety. A wonderful read. Buy it!’ – Sally Spedding

‘The poems are full of colour and images – impressionistic poems, using words like the Impressionists use paint, sometimes the surreal slips in… I like the way the reader is treated as an equal in the creative process.  Lewis’s poems express feeling and wonder and are full of atmosphere. There’s such a sense of life. I particularly like ‘Girl in Queen Street’, it does what a poem should do – enables the reader to be creative themselves, it leaves gaps for the reader’s imagination, I also liked ‘By-Pass’, ‘Car Accident’ and ‘The Girl from Albany Rd’ and many others. There are impressive powers of description, as in: ‘the wind grabs my gaze’ | ‘a maze of a thousand shadows’ | ‘your face borrows light’ | ‘chrysalis eyes’ | ‘headlights of the morning sun’. I love all these, they are original and evocative – so many vivid phrases catch the eye and ear. Many people today, write little essays and call them poems, but Lewis does not write chopped-up prose. A sign of a good poet is the way they use verbs in an original way. I especially like ‘we are all disconnected / in the rain’. I like the flow of humour in your work, not too overdone, but perceptible. And finally, the images also add to the understanding of the written work. I especially liked ‘Opium’ – very atmospheric.’ – Isobel Thrilling

‘I began to glimpse the heart of the man/poet in work that was increasingly breath-taking in its poignancy, clarity, imagination and observation. This is writing pared down to the emotional core, nothing superfluous, every word calculated to touch the raw place within you and make you flinch with the honesty of it. Above all, it makes you aware that among all of the grey loss and sadness, love and compassion still exists, and that some skies are still bright azure. And if Dave Lewis’s work doesn’t make you feel, then you might as well give up on this poetry lark…because that’s what he does best. Make you feel!’ – Agnes Meadows (from issue 44 of Roundyhouse in August 2015)

‘Dave Lewis is a vital voice of the Valleys, in touch with both the streets and the natural world. His free-flowing verse makes him a Welsh son of the Beats.’ – Mike Jenkins

‘Dave Lewis is an accomplished photographer who moves easily between the beauty of an ecological landscape and the stark reality of urban decay.’ – Andrew Davies, The Gallowbirds

‘A collection of beautiful poems and free verse. Dave Lewis, is an ardent environmentalist, seeing so much beauty in the Natural World. In all the poems there is a great richness of vocabulary. Written with compassion and intelligence. My favourite poem is ‘One Kaleidoscope Autumn’ about Dave and his young daughter. The last lines ‘Coated against cold through the bat dry night gazing up at a trillion answers’ – wonderment and magic of simple things! The images created in the mind when reading these poems is awesome. A definite place on everyone’s bookshelf.’ – ponypony

‘A remarkable collection which establishes Dave Lewis as one of Wales’s most exciting poets who I’m sure will soon reach a global audience, because he shines an empathic yet unsparing light on the world around him. Passion and bravery are rare amongst those safer ‘players’ chasing funding and hand-outs. This poet is unafraid, and original, and should be compulsory reading for all those of us blunted by the media and organised religion. Brilliant!’ – Sally Spedding