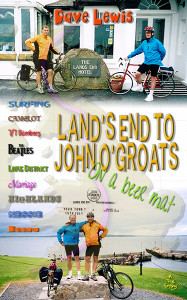 Back in 2005 my friend Derek and I decided we needed a challenge and so what better than a little bike ride around the countryside. Read on…

‘When you’re nearly forty years old, just recovering from glandular fever and double pneumonia what better way to celebrate your wedding than to leave your wife behind to cycle the length of Britain? An account of two friends, who got drunk one night and decided to pedal nearly 1000 miles for charity, proving that you don’t need a state-of-the-art road bike, a skin-tight outfit with a TV sponsor written on the front or a made-to-measure ego – you just need a good mate, a beer mat’s worth of planning, no training whatsoever and the will to do it.’

More than just another cycling trip, this e-book is a funny and sometimes moving account of a few weeks in the summer of 2005 when coupled with various personal events life takes on a new and different perspective.

Finally published, 10 years later, as a paperback and Amazon kindle e-book this book will either inspire you to get on your bike or have you laughing all the way to the pub.

The book is my second non-fiction publication but hopefully it won’t be his last.

Buy the paperback direct from the publisher for just £5.99 (plus postage) or download a copy for Amazon kindle – click here.

It was in a curryhouse in Taffs Well, sometime in May 2005, when my girlfriend announced to me, in the presence of two of our best friends, that we should get married. I nearly choked on my Chicken Tikka Dupiaza! I wish she’d waited until I’d finished my meal at least.

I quickly sank the dregs of my Kingfisher lager, gulped some much needed oxygen into my lungs, went ashen white and mumbled an incoherent reply.

‘Hang on Sue! Let’s not rush into anything, is it?’

Alun and Sian were laughing so much they nearly fell off their chairs!

What could I say? I’d had a good innings as they say. We’d been going out forever. Well, fifteen years or so anyway. Some people get less for murder I’d heard. But there were other reasons of course…

In 2002 I’d become a dad and our precious miracle baby; who’d somehow ignored the sterilisation and lack of a full compliment of fallopian tubes in my wife-to-be, needed a married mam and dad. At least that’s what my mam and dad thought, worried that our hippy existence wasn’t the best way to bring up a child in 21st Century Wales these days.

There was another reason too.

My dad had been diagnosed with terminal lung cancer and it was only a matter of time. So, with a heavy heart and a thousand emotions swirling around inside my mostly empty head what could I do?

The wedding was to be a small affair. Registry office, two witnesses; Alun and Sian, two bridesmaids; our respective daughters. We told no-one. Sue planned and arranged it all. I bought an orange shirt from a trendy clothes shop I’d never be seen in again and the kids; Eve and Eleri, got excited about dressing up in their frilly little numbers. God they start early eh!

Such was my state of shock in the weeks leading up to this monumentus occasion that I needed constant liquid sustenance. I also wouldn’t have survived the ordeal without continuous reassurance from our friends, funny stories from Mark, a dose of glandular fever, some double pneumonia that nearly killed me and five days in hospital, you know, the usual things.

And so it was, over a few pints, then a few pints more, with my secret still in tact, during one such male bonding session that me and Derek started talking about cycling.

Now I don’t know what Ranulph Fiennes does when he begins to plan an epic adventure but I’m sure he could have avoided frostbite and sawing his own fingers off if only he’d scribbled down a few ideas on a beer mat before setting sail for the land of penguins and yellow popsicles. For example, he could have written, in a leaky biro from behind the bar of the Llanover Arms, Pontypridd – ‘Don’t get frostbite’ – and that would have surely saved himself a lot of digit trouble.

As for me and Derek well we should have written – ‘Don’t buy a Dawes bike’ or ‘Do some training first’ or ‘Make sure you book some B&Bs’. Actually, looking back, I think we needed a few beer mats but hindsight is a wonderful thing.

So, having got married and missed the impromptu party that started in our house after someone spotted us all dressed up (‘What? Dave in a shirt?’ someone said) taking photographs over Ponty Common, me and my new wife contemplated life apart for two weeks on our brief, one-night honeymoon in an old country house somewhere between Brecon and Crickhowell, paid for by Alun and Sian.

‘Not as drunk as you are Dave,’ came the reply about three minutes later.

‘Yeh, but I haven’t been on a bike for ages. Years in fact. In fact I think it was twenty years ago. It may have been longer than that in fact.’

‘Yeh, well, anyway, I have bad knees, so it wouldn’t work,’ I continued.

‘You’ll be fine Dave. I used to go fishing to the reservoir with my knees and I always got lost on the way home,’ added Derek reassuringly.

‘OK, you’ve convinced me mate. So we’re going then!’

‘OK, we better get a curry then first.’

‘Yep, they don’t strike me as cyclists though, too much beards. Think about it. You’d never win the Tour de France with a beard.’

‘Do Italians still have beards?’

We stood to leave. ‘Don’t forget that beer mat. We don’t want to go without that.’

‘I’m quite fascinated by the LEJOG – whether it be walking or cycling it – even though the chances of me doing it myself are pretty remote! I’ve read a fair few books about it in recent years, and they tend to be a mixed bag. Some are too brisk and impersonal, and seem to be nothing more than a list of the miles the author clocked up in the shortest possible time. They appear to have no interest whatsoever in the places they visit, and I wonder why they don’t just sit on an exercise bike for 10 hours a day instead. Others, such as Mark Moxon’s ‘When I Walk I Bounce’, and George Mahood’s ‘Free Country’ are much more entertaining. At first, I was put off Dave Lewis’ book a bit by the title. I thought it was going to be the boring anecdotes of a couple of lager louts, the sort who shout “we’re mad we are!” and out-stay their welcome pretty quickly. But no. Although this is a brisk and breezy read (I read it in one day), Dave has a genuine interest in the places he’s travelling through, and tales of woe about his bike are interspersed with little snippets of history, and some political commentary too. He loves the countryside, particularly the Scottish Highlands, and animals. They did this ride during July 2005, and the events of 7/7 form a poignant backdrop to the whole thing. Ideally, I probably would have liked a bit more detail, but I’m looking forward to his next book, about his travels around Wales.’ – Sarah Hapgood (Vine Voice)

‘Great read, very funny. These guys have a great sense of humour, which is exactly what you need when doing any sort of challenge like this. An enjoyable easy read and some great images too. Some classic one-liners in there which I won’t spoil by posting here but had me laughing all the way to the pub. Not one for the bus spotters as there is a severe lack of maps, hill profiles, daily carbohydrate intake and route advice. Basically this is just about some mates jumping on a bike and cycling the End to End and coping with whatever life threw at them with a smile and a beer. Having said that though, you could still use this as a very accurate guide to plan your own trip. As the author says – just do it!’ – pokie

‘Inspirational. I’ve got to say I enjoyed this book from front page to the last it make me smile many times
I think when I do it I will be a bit more more prepared ie booking b and b in advance this 62 yr old body needs a definite bed lined up its a great read.’ – Amazon Customer

‘Two normal? guys doing it the right way, on a wing and a prayer as things should be done. Not too much planning involved. Very funny.’ – Bushtucker Man

‘Much easier to read than to cycle LEJOG. Every day summed up: what the authors ate, what they drank, how far they went and who they met. Enjoyable!’ – Michael Ewing

‘The author and his companion’s journey is an informed account by two obviously fit but amateur cyclists – not for them nose down lycra clad speed merchants with 7K bikes – but a useful guide for anyone thinking of undertaking the aventure. It is marked by humour and and a strong sense of place and can be compared to the style of Bill Bryson’s travelogues and deserves a wide readership. On a utilitarian level it is compact and makes an ideal present for anyone with aspirations to do something different without a lot of fuss and palaver beforehand.’ – Amazon Customer

‘Enjoyable and easy to read. Funny all the way through, lost count of how many bike shops they visited with the Dawes bike. Very easy to read and we can all relate to the journey anywhere by bike and its pit-falls. Very good read.’ – Tony1402

‘A great read, couldn’t put it down and read it all in one sitting. Being a cyclist myself I can relate to everything said, fair play they sound like they had a blast. It’s even planted a seed in my head now. I’m from Ponty too Dave if you fancy doing it again one day.’ – Amazon Customer

‘Really enjoyed this. Would have liked to read a bit more. If it didn’t make me want to have a go at Lejog, it’s made me want to think about it. Really easy, amusing, readable style and terrific pics. Well done on the ride, and the book! Did you get any sponsorship from Dawes?’ – Steve H