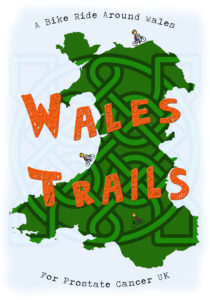 Not quite as far as last time, but just as challenging, especially as I’m fifty (eleven years older), still no wiser and have only been back on the road bike about twice since then!

I managed to cycle 688 miles around much of the coast of Wales and have just finished a book of my travels.

My dad suffered from prostate cancer but beat it. So as a tribute to him, and the many other people who successfully triumph over this type of cancer I thought I’d test my own over a gruelling two week circuit of the Principality. In addition I also hope to inspire others to repeat the course and help me turn this haphazard ‘loop’ of Wales into a world famous iconic ride just like Land’s End to John o’ Groats.

After completing the ride I wanted to encourage others to do the same thing and so I setup the Wales Trails website.

Welsh writer Dave Lewis has just completed a two-week cycle ride around Wales. He covered 688 miles, raised £500 for Prostate Cancer UK and has just published a book of his adventures. But wait, there’s more…

After cycling the iconic Land’s End to John o’ Groats challenge back in 2005 Dave has been thinking about setting up a similar ride in Wales. Well, here it is!

‘Wales Trails‘ is a new ride for everyone to enjoy.

The route: A loop of Wales

Duration: As long as you want / two weeks or more

Charity: Up to you

Aim: To put Wales on the ‘must do’ bikers list

Dave’s idea was to create a ‘LEJOG-lite’ in Wales. The famous ‘End-to-End’ ride usually takes two weeks and cyclists cover approx. 900+ miles. The lap of the Principality can be whatever you want but 500-700 miles seems about fair. This means the Welsh ride is shorter and therefore great training for the LEJOG challenge.

However, if you do the ‘Wales Trails’ ride in two weeks the shorter distances per day means there is more time to enjoy and savour the fantastic Welsh scenery and meet the fabulous Welsh people.

This is a chance to put the land of the dragon firmly on the cyclists’ bucket list of adventures and also bring in some much needed income to the Welsh economy. Welsh B&Bs, bike shops, pubs, cafés and tourist attractions should all benefit!

So if you fancy a challenge with a difference why not attempt a loop of Wales and ride over 500 miles along some of the most stunning coastline anywhere in the world!

If you want to find out more why not visit Dave’s website or pick up a copy of his book, where he outlines his vision that one day, Wales, with its rapidly diminishing yet rich cultural heritage, will become a ride that all cyclists will want to do. More than just a guide, but a funny and thought-provoking account of two weeks in the summer of 2016 when one man’s dream becomes reality.

‘Wales Trails’ is available from all good bookstores, from Amazon and Dave’s own website as a paperback and e-book.

The last time I decided to cycle anywhere further than the corner shop for a pint of milk and a Tiger loaf was back in 2005 when my friend Derek agreed to go along with my idiotic suggestion that we ride almost 1,000 miles, uphill, from Land’s End in Cornwall to John o’ Groats in Caithness.

The good news about that trip was that somehow, through much adversity, we did eventually make it. We had a fantastic time, met some wonderful people and got so drunk in John o’ Groats that I bet the locals are still wondering what hit them. It was Mark and his awful jokes by the way.

The bad news was that my bottom would never be the same again. Neither would my faith in British engineering, as my brand new Dawes Discovery 701 seemed to have this strange dislike of spokes. Keeping them attached to the wheel that is. So, with the wrong wheels, racers, not tourers, our intricately planned (on the back of a beer mat) historical and wildlife sightseeing trip through England and Scotland quickly turned into a bike shop Trip Advisor adventure! 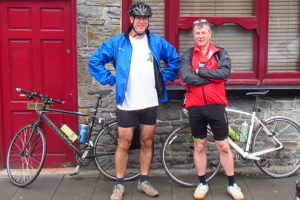 When Steve Redgrave said to shoot him if he ever went near a boat again I uttered a similar refrain after pole dancing around the famous John o’ Groats signpost back in July 2005. But, after a couple of gallons of Scottish beer I completely forgot about this sacred vow, my tender posterior, seized-up knees, sunburnt hands and aching back.

And like the amnesiac fool that I am I haven’t stopped talking about doing a similar ride for the last eleven years. Luckily, no one would listen to me long enough for it to become reality.

A lot can happen in ten or eleven years though. Sadly, my wonderful dad passed away, my mam moved house, and my daughter gave up her bottle, whizzed through primary school, became fluent in Welsh and then metamorphosed into a six-foot teenager.

I started a fabulous new job, teaching computers, digital photography and Photoshop to adult learners about fifteen minutes drive away from the house. Then, about eight years later, I lost it. The job I mean, not my marbles. They went years ago.

Now, as it happens I’ve always been pretty good at losing jobs. In fact, since 1989 I reckon I must have had over twenty-five or even thirty different jobs, often doing two or three at the same time. Sometimes I just give them up because I get bored or I fancy doing something else other times there are more sinister forces at work. I once gave up a Head of Biology teaching job in a great school with great kids to go to Kenya to look for elephants. A year later, I’d seen the elephants and was back in Wales. Then about a week afterwards I decided to try to learn German and go to the Seychelles to tag turtles. I didn’t go in the end. Never been any good at languages.

My aim was to raise £500 for the charity via my JustGiving page. See how I got on by clicking the button below:

JustGiving is simple, fast and totally secure. Your details are safe with JustGiving – they’ll never sell them on or send unwanted emails. Once you donate, they’ll send your money directly to the charity. So it’s the most efficient way to donate – saving time and cutting costs for the charity.

Prostate Cancer UK fights to help more men survive prostate cancer and enjoy a better quality of life. We find answers by funding ground-breaking research, we lead change by raising the profile of the disease and improving care. And we support men by providing vital information and services.

‘Dave Lewis takes on a circuit of Wales starting from his home town of Pontypridd in South Wales and hopes that this circuit of 688 miles will become a ‘must do’ for cyclists in the same way as Land’s End to John o’ Groats (which he famously did planned on the back of a beer mat!) or a Coast to Coast has become. Wales Trails is written from the heart: It’s chatty, charming, informative, forthright, and sometimes downright irreverent!… It’s as if he’s sharing his travels with you over a pint… or two! Dave Lewis is obviously no elite cyclist, so this should inspire anyone who has a bike and a backpack to have a go and to take the route less travelled, and if you fancy doing a similar loop it’s a pretty good guide where and where NOT to stay!’ – Don Szmidt

‘The idea of cycling off into the blue yonder carries a strong appeal. Employing a vivid first person narrative, Dave takes us on a tour of Wales beginning from his home town of Pontypridd and then heading north along the coast to Inys Mon (Anglesey) and back via Oswestry through many interesting border towns, describing his encounters with people, pubs, castles and wildlife. A readable and entertaining book, enhanced greatly by the photos taken along the way and a splendid adventure that we can share without leaving our sofas; or get out on a bike and do it ourselves. As a keen cyclist I thoroughly enjoyed this book.’ – Amazon Customer

‘Settled down in my favourite armchair with some tea and a cake to read my new cycling paperback from Dave Lewis. I was looking forward to reading about his adventures travelling around my homeland, maybe with a bit of history thrown in. Well, five mins in and I laughed so much I nearly choked on my Welsh cake! A very funny read indeed. Lots of great photos, music and even a bit of poetry! Very clever writing and easy to read. Just the right amount of serious versus comedy. Maybe a few too many castles and not enough pink sheep but you can’t have everything. Highly recommended.’ – pokie

‘This is an uplifting charming little book, that made me want to get off my backside, oil my bike and take to the road, and set off on an entirely doable adventure. Dave Lewis is a very engaging author, interesting and interested in the characters and places he encounters along the way. Come and meet some of them. Highly recommended.’ – RhysL