After the success of the ‘Wales Trails‘ project: the ride, the money raised for charity, the website and the book I knew it wouldn’t be long before I got the cycling bug again and thought up a new ride / challenge. Unfortunately, age and aching limbs have a habit of creeping up on you and so it was three years since the last big trip before I managed to put something else together.

The Hadrian’s Cycleway is a relatively new route, following the famous Roman wall from west to east across the north of England. The C2C trail is a far more well-known ride and some sources say it is the most popular cycling challenge in the UK.

I decided to combine the two trails and do a circle. I’ve recorded my thoughts on the journey in my latest book, my nineteenth. I hope you enjoy it.

Trust me to want to cycle backwards. Especially as on my last two ‘big’ trips I’d managed to go with the wind. And of course if you read any UK cycling guidebooks or websites they will all tell you to go west to east or south to north. If you’re looking at Land’s End to John o’ Groats (LEJOG) cycle uphill (north) and if you’re going to do the Coast to Coast / Sea to Sea (C2C) route across northern England then go east young man! The hill gradients are easier and the prevailing winds ease your passage. Bugger.

It was my own fault of course. After the success of setting up the ‘Wales Trails’ route, where I’d designed the snazzy website – www.wales-trails.co.uk, enjoyed the very modest but pleasing book sales, raised over £500 for Prostate Cancer Wales and hopefully put the land of my father on the world cycling map I had the bug again. The cycling bug I mean, not my old friend double pneumonia, which was never far away either.

I’d always wanted to ride across the north of England, especially the scenic Lake District, Celtic Cumbria and perhaps do the famous C2C route. It was, after all, the most popular long-ish distance, cycle ride in the UK. Not as famous as LEJOG but it was up there. The problem was, whilst looking at the map, I’d also discovered the Hadrian’s Cycleway. This is a route that roughly follows the old Roman wall built by Emperor Hadrian. Well, when I say ‘built by’ I doubt whether the old guy actually laid any of the bricks himself and he died before it was completed anyway. In fact three legions of infantrymen took around six years to complete the construction. Each legion was around 5,000 men strong and extra manpower was provided by conquered tribes. I think we call them slaves nowadays.

Anyway, now I wanted to do two rides. The C2C and the Hadrian’s Cycleway. OK, first problem. Both routes should really be cycled west to east for the reasons given earlier but I wasn’t sure I’d have the time to do two separate rides that were so far from my home town in Pontypridd, south Wales.

Right, easy solution, I’ll combine them and do both. And so yet another silly plan was born. I’d make it a loop and embrace the Buddhist doctrine of doing stuff in a clockwise direction. I’d start one end and cycle around Cumbria and Northumberland, taking in some great Roman towns, see a bit of the famous wall, have a ‘Newky Brown’ in Newcastle, see the river and iconic bridge (designed and built by the same contractors that built the Sydney Harbour Bridge), visit the mouth of the Tyne, tunnel or ferry across (whichever was open / running), pop down to Sunderland, then cross-country, over the Pennines, wind my way through the Lake District, over some horrible hills (or try to avoid them) and down to the beach for a couple of beers while watching ‘Game of Thrones’ or ‘Gladiator’ or some such suitable swords and toga epic on the B&B TV. Probably ‘Carry On Cleo’ with my luck.

Not a bad plan I thought and seeing as I’d probably be biking alone again I thought it best to at least look at Google Maps or something before I went up north. Then I stumbled upon more problems. What shall I call this trip / book? Do I wear a centurian’s helmet or a cloth cap that might have been worn by the great poet Wordsworth? Oh dear, too many choices.

‘Dave’s third cycling adventure is another little gem for fans of amateur cycling memoirs. Following on from the success of his LEJOG and Wales Trails books his latest outing charts a week in the north of England where he tackles two iconic cycle routes: Hadrian’s Cycleway and the Sea to Sea (C2C).

‘In true Buddhist fashion Dave cycles clockwise across Cumbria, Northumberland, Tyne and Wear and Durham. Taking in ancient Roman sites, great modern cities and the beauty of the Pennines and Lake District. Once again he makes his journey come alive with witty comments, weird references and superb photographs.

‘If you’re thinking of doing a similar ride then this account will act not just as a guide but also highlight the pitfalls of a lack of planning, reliance on technology and disregard for the power of the British weather.

‘I really like this cover design. Very appealing and unique.’ ★ – Tanja Prokop 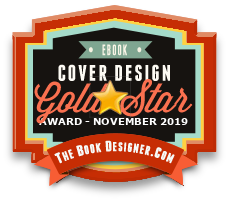 from ‘The Book Designer’