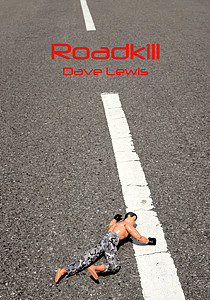 My eighth book is a poetry collection. The idea for the title poem was conceived over 30 years ago and took over a year of writing and editing to finally get down on paper!  The rest of the work has been divided into three sections and also spans a number of years’ work.  Roadkill was published as a paperback and e-book in October 2013 by Ponty Press and is the book I was most proud of at the time as I felt I’d finally found my true voice. I was unafraid to say what I felt in a way I was comfortable with.

This is a collection of contemporary poetry dealing with class war, love, depression, nature and death set against a backdrop of overwhelming, negative computer technology.

‘Alive, daring, challenging and thoroughly modern. A primal scream of passionate despair, a rant at injustice and a socially aware commentary on our lives today. Once again we experience Lewis’ keen eye for the world around us. Emotion pours out of every line. Intense, confessional, observational, tender. A writer who is not afraid, this is a great book of poetry in a world of shallow pretenders.’ – Mark Davies

This book can be purchased direct from the author as a paperback for just £6.99 (free postage) or as an e-book on Amazon kindle for £4.99.

A good friend of mine, who doesn’t talk to me, or telephone me, or ask what I’m up to or if I fancy a beer anymore, e-mailed me last minute to say she’s on Twitter and that I should ‘follow’ her. She added that she’d be on Facebook if I ever needed to get hold of her in an emergency, and asked why I wasn’t her friend yet, even though I thought we’d been friends since we started school together, on the same day in 1970…

Anyway, I thought why not? Get with the program Dave, you’ll be left behind soon you cyber dinosaur you!

I signed up and waited.

Then I sent a text (one of only 3 this year btw) to my oldest, best friend (pending) to ask how it all worked and when I could hope to start reaping the benefits and all.

She replied instantly (almost before I’d hit ‘send’ in fact).

And I did. I started to search for and follow all the ‘Dave Lewis’s’ I could find.

There were a lot.

Despondent now, I walked (using my legs) down the pub.

Occasionally, a boy, or a girl, or a robot, would glance my way, and undress me of my t-shirt from Zanzibar, project violence into my smiling eyes. The eyes that filled with tears as the sun rose over that temple in the jungle, the eyes that gaped wide at those elephants in musth, the eyes I rubbed salt from when the dolphins and turtles outswam me, and the eyes that nearly went snow-blind on the equator, up that volcano.

I log on again Sunday morning, with a sore head, think it’s alcohol-related, this hollow feeling lurking in my stomach.

And I press the ‘Back’ button to the girl I stood next to. At the hot bar, with the hot pants.

I smiled and asked her if she came here often. She spat out her reply with the venom of a cobra (I saw once in Tanzania) and was gone, all too satisfied, she had logged off, momentarily, disconnected from her network, risked the downtime, to push between me and a DriftKing to order her shots.

I had to withdraw my puppy dog eyes. Go home, log on, search for that life.

That life I’ve been wasting up to now.

in the back garden

dare me to slip

as I stare, mesmerised,

Walking at dusk through the old park,

the golden glow of forgiveness

hangs in the air long enough

for you to steal it with both hands

but you choose not to,

to let the sun set on that particular episode.

You walk the other way,

past the lake, past the flowerbeds

until you become traffic,

for I will not open that wound again,

will not offer the exquisite beauty of autumn

in exchange for your eyes,

that soft touch and hard hug.

No. It will not happen again this sharp day,

I promise, I swear in my best verbs.

‘Dave Lewis’ new work opens with Henry Thoreau’s famous quote, “The mass of men lead lives of quiet desperation”. Very apt in our Twitter-twatter, X-Box-Factor, age when apathy, indifference, and resignation is the norm and the – increasingly – lost generation slumber party away their lives wearing Onesies. This book of verse is polemical, confessional, a slap in the face wake-up call, and a much needed challenge to all “those up there” who should have, and could have made it better. Sadly, therefore, not likely to be very popular with the Arts Council aficionados, but speaking and reaching out to all those that really count. “The Voice”, is for real here and poetry is back where it belongs, right there at the heart of the matter.’ – John Evans

‘Deep, thoughtful and sometimes dark poetry from Dave Lewis. A good mixture with everything from Haiku to some much longer pieces. The incisive and acerbic observations on our modern “virtual” world are balanced by Dave’s obvious love of the natural world.’ – Alan Day

‘At times witty, at times gritty, Dave Lewis has produced a fascinating collection on human connection. The humour is dark, the love is bright, the poetry is touching, taunting, spewing, galling, tender. Modern life is out there and engulfing but the passion for truth still lives. Roadkill overflows with personality, it’s a roller-coaster ride, and to use the words of the poet “I’m smiling like Tenby”.’ – Eloise Williams

‘Dave Lewis’s latest collection, ‘ Roadkill’, opens with the famous words of Henry David Thoreau: ‘The mass of men lead lives of quiet desperation’. This is a theme that permeates the book. The opening poem, ‘Roadkill’, is full of despair as the poet sees life as a journey ‘in sunshine and in shadow’ – quoting Poe’s ‘Eldorado’ – an Eldorado it seems that we can never find. We are chance casualties, rendering life meaningless:

In this life ‘we are frenzy/we are forlorn/we are sunlit/we are hollow…‘ (the reference to TS Eliot’s poem ‘The Hollow Men’ recalls a similarly bleak vision: there are echoes of Eliot in several of the poems). I found this poem quite difficult to read with its relentless sense of bitter hopelessness and anger about the human condition and contemporary culture. It is a long poem (11 pages) and the reader may feel overwhelmed, as indeed the world can be overwhelming with its greed, its constant reminders of suffering and its apparent meaninglessness.

Although the desperation theme is constantly present, in the later poems – which for the most part record relationships, characters, lifestyles and places – the tone becomes quieter. There is room in these later poems for tenderness; and there is some consolation, if not redemption, in love, relationships and in the beauty of the natural world. This is a compassionate poet of emotion and sensitivity; his use of pared down concise language and short simple forms in these poems is very successful.

The haiku illustrate the poet’s ability to capture fleeting, understated and yet powerful impressions in few words; for example:

The ability to convey the unspoken emotion is nowhere stronger than in ‘Dad’, which alludes to the death of the poet’s father:

The simple conversational style and lack of punctuation give the poem a haiku-like, open-ended quality; the restraint serves to strengthen the effect and the result is an effective and memorable poem.

‘Duelling Scars’, the second section of the book, describes the emotional effects of events and relationships. Individuals and their lives are remembered; often these are people who may be overlooked, considered insignificant in the contemporary world with its material values. So, ‘Victim ‘takes a compassionate view of a child with a birth defect. The ‘mockers – healthy and dumb‘ will live while this child, ‘sweetness personified and vacant stare’, will be ‘bobbing to the night-time/your mammy won’t admit/ you have to welcome‘. ‘ RIP John Thomas’ describes a man whose unremarked life and ‘unkempt room/gas fire furnace-warm in winter‘ suggest an urban version of RS Thomas’s typical Welsh farm labourer, having a similar subject, rhythm and elegiac tone. By showing the value of these unprepossessing lives we are made to see from a different perspective: an important function of poetry.

Reflections on the past, mortality and change occur in many other poems. ‘The Wrong Bus’ (whose concerns echo Frost’s ‘The Road Not Taken’ and TS Eliot’s ‘shadow at evening rising to meet you’), brings poignancy and a sense of awareness of mortality to the humdrum everyday occurrence of taking the wrong bus. The simple clear language serves to enhance the heartfelt emotion behind the memory.

I got the wrong bus when I was twenty
and burning and immortal
I can still see that day oh so clearly,
the beating reflection of autumn,
and those shadows that lengthen with age

In the last section of the book, ‘Tweets’, the poet returns to the subject of the Internet and other influences on contemporary life. ‘Artes Mundi’ is a sardonic take on modern jargon of psychology, advertising, management and general inflated self-important hype, its dry final line (which I won’t give away!) being a humorous comment on these. The last poem in the collection, ‘Run Towards the Fire’, has, appropriately, the last word: ‘nothing is as beautiful as it used to be‘ in this ‘upside down black and white life‘ – so we should ‘Run towards the fire/rather than further away‘. – Gillian Drake (from Issue 32 of Dream Catcher)

‘A remarkable collection from Dave Lewis’s heart and soul. From the stark “Roadkill” to “Run Towards the Fire” his honesty doesn’t flinch.  Achingly good.’ – Sally Spedding