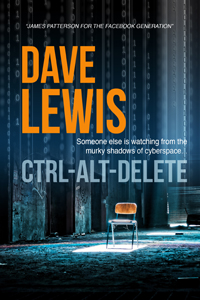 My fifth book was a ‘Cymru noir’ / ‘Welsh noir’ crime novel set in various locations around south Wales. The book was originally released as an Amazon kindle e-book in October 2011 but after selling over 1000 copies (downloads) was later brought out in paperback.

When beautiful Jenny Morris uses Facebook to get her ex-boyfriend Hal Griffiths to stalk her she has no idea what a dangerous game she is playing – for someone else is watching from the murky shadows of cyberspace.

And when an horrific murder in a sleepy Welsh village stirs a seasoned reporter, a conceited detective and an overweight IT expert into action, they too always seem to be one step behind the mysterious killer – Hagar. 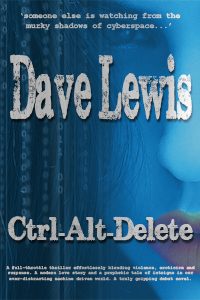 Against the backdrop of a tangled web of deviant sexual practices Hal must rescue his lover before the killer strikes again. In the wilds of the Brecon Beacons National Park an electrifying climax is played out when Hal is forced to confront his deadly rival.

Social and political commentary within a close-knit community has never been so honest. Pornography morphs into technology and we are forced to ask ourselves the question – will man’s lust for instant gratification ultimately be his undoing?

A full-throttle thriller effortlessly blending violence, eroticism and suspense, Ctrl-Alt-Delete is both a modern love story and a prophetic tale of intrigue in our ever-distracting machine driven world. A truly gripping debut novel by Dave Lewis.

So far there are over 30 positive reviews on Amazon.

Jenny had drunk far too much white wine. It was an easy mistake to make and now she was going to die.

How long had she been unconscious? She had no idea. No concept of time. Struggling hard not to panic as she felt herself begin to hyperventilate Jenny instinctively knew she must absorb and assimilate every detail, something somewhere might save her. She also knew she must act immediately if she wanted to escape.

She struggled for breath and forced herself not to give in to the gagging reflex as her desert-dry mouth filled with burning bile. Jenny’s swollen eyes strained to become accustomed to the murky gloom. She tried to shake her long, curly brown hair away from her face but dried sweat held it tight as the cold metal of the handcuffs cut into her wrists. Her whole body was aching and her pulse throbbed relentlessly in her head.

Thinking back to earlier that evening she vaguely remembered her vision blurring and the muted sound of words slurring, like holding your head underwater in the bath. Then her stomach had tightened and warm flushes had begun to spread out all over her body. A distorted Daliesque clock face slowly slithered down the wall. As Jenny’s coordination flew off into the evening her knees buckled. She headed for the carpet in slow motion. A small, rough hand expertly plucked the free-falling wine glass from mid-air and delicately placed it on a low wicker table.

Terror can manifest itself in different ways but all Jenny could visualize at this moment was Hal’s grinning face staring back from the centre of a computer monitor. In the first brief seconds of consciousness she searched for reassurance. She tried to reason with herself, to tell herself it would be OK.

She tried to justify her actions, to make sense of it, to make it alright. It wasn’t her fault. What else could she have done? Stalkers don’t just stalk anybody do they? You have to give them a reason. You have got to make them want to do it.

Oh shit! What have I got myself into? The thought of being a lonely old spinster was suddenly very appealing… then unexpectedly, off to the side, a long penetrating torch beam flashed across her body and in a nanosecond she was catapulted back to the present. The harsh light settled on her pale face and blinded Jenny for a brief moment before an echoing click plunged her back into silence and darkness.

With her senses heightened by fear she could taste the damp, musty smells of straw, onions and potatoes. The odour of mouse droppings mingled with the stink of rotting, wet vegetables. She desperately searched the dim recesses of her prison. Her funeral-black pupils frantically scanned the darkness for hope.

Penetrating, probing. Looking for anything that could offer her a way out of this nightmare… and then she saw them.

Laid out purposefully in a neat line on the small wooden bench in the corner of the barn. Almost out of sight. Not placed in front of you – for effect. Not staring you in the face, not carefully arranged like pretty glass ornaments on a living room shelf. Not meant to shock or terrify. These had been put there for a purpose. Practical. To be used.

Jenny shivered, her big brown eyes grew to saucers, her face became china-white as the adrenaline kicked in and coursed through her blood. She tried to jerk free but the restraints held firm as she slowly traced the metallic shapes in perfect clarity. Her screams were muffled by the crimson scarf tied tight around her mouth, and an earthy taste of silk mixed with her briny tears as they streamed into her mouth.

Suddenly and without warning she felt warm liquid flow down her legs as her bladder opened involuntary. She stank of fear. She missed her daddy.

Then, slowly but surely, the same rough hand emerged from the shadows and reached for a shiny, clean scalpel that glinted sporadically in the half-light. It edged closer to her, leaving the rest of the knives, dissection instruments and power tools set out clinically in the dark.

Hal Griffiths had been fast asleep. His head submerged deep in a pillow, Egyptian cotton sheets wrapped around his lean but muscular torso.

A thick winter duvet lay in a pile on the floor next to a pair of old Levi jeans and a faded blue Billabong tee shirt. Bridgedale light-weight walking socks and a pair of Merrell trail shoes were close by. Smiling to himself, semi-conscious now, he kept his eyes closed tight.

These were the precious minutes just before waking when your mind knew it was time to face another day but your body craved another hours rest, or was it the other way around? Either way he wasn’t going anywhere, the voluptuous super-model Elle McPherson was with him.

‘Have read both of Dave’s thrillers and thoroughly enjoyed them. The stories grip you from the beginning and take you on a thrilling, chilling ride. His IT knowledge is excellent and his descriptions of systems and language gives the books a realism which surpasses Deaver’s The Blue Nowhere – it made me check my Facebook security levels. Both books are a must for readers of murder thrillers. Cant wait for a third instalment.’ – Rhondda Rover

‘The novel for the Facebook generation. An ambitious tour de force that should put Wales well and truly on the international crime thriller map. Believable characters and a gripping story. Can’t wait for a sequel to find out what happens to Hal. Love the ‘Alien’ tag line too, very contemporary and quite scary.’ – Mark Jones

‘This is my first e-book and what a way to start. It keeps you guessing right up to the end until the dreaded Hagar is revealed. All characters were developed well in the early chapters, you get to know each one and could associate with their surroundings. The author displays excellent knowledge of various subjects throughout the book, IT knowledge especially (and for some reason knows exactly how to dispose of bodies?) The pace of the book was perfect, you can’t put the book down during the last quarter as you need to know how it all unfolds. The quote regarding the scenario for Cardiff is brilliant! Had me in stitches. Looking forward to the next novel by Dave, let’s see what Hal can do?’ – Leon Moses

‘After downloading the book to my Kindle I found it very difficult to put it down! The intriguing characters and storyline kept me wanting to read just one more chapter. Then another and another. This is the way books of this genre should be done. Suspense, intrigue, who-dunnits, sex & violence, but all essential parts of the plot. And all on our own doorstep! Who’d have thought!. If the next book is as good as this one, it will be something to look forward to.’ – Mal92

‘As an I.T. Consultant, I generally avoid novels based in the world of computers because they’re poorly researched & make me cringe. But this is an exception (it’s clear the author has actually done a bit of research). Regardless of whether you’re into computers or not, it works well as a dark, psycho style thriller (I agree there are some slight similarities to James Patterson, but I think Mr Lewis has a style of his own). Additionally, there is an element of romance & some good social/political satire. Plus a couple of good twists towards the end. All in all, an entertaining read, looking forward to the next one…’ – Film Buff

‘A witty and intelligent read, with a helluva twist at the end. Highly enjoyable, thoroughly recommended – fingers crossed there’ll be a sequel. Well deserving of a 5 star rating.’ – Julie Ovens

‘Could do for Wales what Stieg Larsson did for Sweden! I love Dave Lewis’ writing, always so multi-layered. You can read his stuff and just simply enjoy it or you can delve deeper and go back over it and find hidden gems, political comment, social comment. This book has violence, kinky sex, dream sequences, rock music yet is fundamentally a love story. A modern one at that and one that gripped me from the start. I wanted to find out what happened next and that is always good in a crime thriller. It’s well written, the plot unfolds with the odd ‘end of chapter cliff hanger’ approach too and I never felt bored. Kept me up late just because it was so different to many murder mysteries. Commercial as it deserves to be and I hope it becomes, it is also literary fiction and without spoiling the end I want a sequel.’ – White Swan