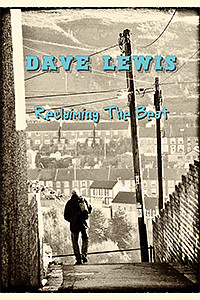 My twelfth book is another cutting-edge, avant-garde poetry collection like Roadkill. A journey through time and space, through heartache and depression where glimpses of hope shine through the grey veil.

The original idea was to split the book into two halves: the darkness first followed by the light second. The sad, lonely, depressing half and the happy, uplifting half. I discovered things don’t always go to plan!

A friend described these poems as – ‘This collection is a deeply moving, all-seeing observation of modern life, and if we are brave enough to stay on the ride we are ultimately rewarded with a positive re-birth like a phoenix rising from the ashes of despair.’ I decided that was good enough, even though at the time I was concerned the negative vibe might be too much to handle.

Many of the poems were written at a time when I’d just been made redundant from a job I loved, was stuck in a new job I hated and my mental health wasn’t in the best of places to say the least!

The title is taken from famous American writer, Jack Kerouac’s, definition of the ‘beat generation’ and a quote from his girlfriend Joyce Johnson, who said he described ‘beats’  as ‘the poor, the pure and the inward’. I identified with this so much and started to see myself as my father, who’d worked hard all his life to provide for his family only to be rewarded with ill health and an early death.

I was particularly pleased when another friend wrote of this collection – ‘This is a graphic and painfully honest account of a hardworking man, nearing fifty years old, struggling to come to terms with his own mortality. There is fear, there is unfairness, there is anger and finally resignation, but the glory of love and appreciation in the beauty of nature finally triumph in this remarkable psychological journey. This is poetry written while crawling naked over broken glass, a cutting observation of modern life.’ It kind of summed it all up for me.

Published in March 2016 by Publish & Print this book can be purchased direct from the publisher as a paperback for just £6.99 (plus postage) or as an e-book on Amazon kindle for £4.99.

born beneath a tangle of stars

away in a manger

the whistle of distant collie

but all too soon

a frosty breeze chews the nostrils

mass in trucks with fear

dragging her chair across the carpet

manufactured in the factory

nestled underneath the familiar glue-speckled hills

dripping mint on the lottery of sex

a rabble wrapped in wool shawls

blind to the tender meat we are

A seagull
first high, then low,
clotting with friends,
sailing past paper strawberries,
multiplying now
– then losing them all
in a sudden waterfall.

And the slate is as grey
as their suits –
those lawmakers no-one dare notice,
the nameless, the faceless extravagance
that we tolerate,
reluctantly…
for we are far more concerned
with the feathers
and the shiny things
and the sea breeze
that shapes the seagull’s nest.

‘Enjoying your lunch?’
‘Mmm.’
‘Well, I don’t talk to her much see.’
‘No?’
‘My son has a good job but he’s moved up there with her, we
didn’t see them for years.’
‘Daughter-in-law is all fur coat and no knickers.’
‘Likes to have all these solicitor friends, and bankers.’
‘Oh dear.’
‘I drove up there once – you know what she said?’
‘Wish you’d have phoned, we might have had visitors!’
‘The cheeky fuckin’ bitch!’

‘Do you know how many times I’ve been in hospital this
year?’
‘Three times?’
‘Three times.’
‘I went on holiday, came back, had a water infection.’
‘Oh dear.’
‘No bladder see.’
‘And then the diabetes kicks in.’
‘Aye, can’t take it with you.’
‘They’ll be alright, they know that, told them see.’

‘This car is crap.’
‘I can’t help it see, I see one and I have to buy it.’
‘My daughter says why not dad?’
‘Don’t drink or smoke.’
‘Ever had a Peugeot? Crap steering wheel, too small.’
‘It’s going back after Christmas.’

‘I’ve changed the locks see.’
‘In case I go tomorrow.’
‘I know her, she’d be straight down, try to empty the house
she would, horrible cow.’
‘Can’t complain though.’
‘Sandwiches is it?’
‘Mmm.’
‘Better go with her now.’ (dog tugs at lead)
‘Too wet.’
(He waves goodbye and gets back in his car)
(I smile)

“From ‘My Town’ – ‘where the breeze tastes of disappointment as it blows from street to street, carrying it’s heavy load like a tarnished collier, dropping off some misery and a century of grief,’ Dave Lewis is a true Welsh poet of the Valleys who illustrates in this slim volume just how deep the connection between artist, the land that nurtured him and those long since consigned to history burns. Here you will find poems to be savoured, dwelt on, and considered over weeks, months and years. Both a cry and lament for the human condition they are the work of a mature and master poet who like everyman craves life above all else. ‘Eighteen thousand sunsets and I want Eighteen thousand more’.” – Catrin Collier

“From ‘conveyor belt’ to his final ‘Haiku,’ Dave Lewis has crafted a powerful and insightful collection, whether invoking the past, dissecting the present or sensing the future. ‘…while the sun fades on my brown skin, in an empty car park, in my leaking mind, that’s waiting for more rain to fill it up again.’ Reclaiming The Beat is remarkable in every way. His best yet.” – Sally Spedding

“These poems fearlessly confront the rhythms of the heart; loss and grief figure here, but without sentiment or self pity; embracing the power of the imagination and exploring what it is to live the creative life. Unexpected joys abound in the world of nature, the simple joys of language and rhythms of everyday speech and life; meetings, memories, all share in this celebration of things as they are and have to be. In an age when we suffer the imposed culture of mass media and feel increasingly cut off from our roots, these poems are an outcry and reassertion of the true feelings of the individual, unhidden, unashamed and fiercely assertive of the beat that runs through us all. There are poems of wonder and delight – culminating in the wonderfully positive final haiku. These are unsettling poems in their honesty, forcing us constantly to reassess our attitudes to our feelings and recognise how fragile is the veil of comfort, always so close to being ripped away. But ultimately, in their assertion of the rhythms of places we call home, memories and feelings, these are poems of hope and redemption through the restive but exhilarating power of language.” – Mick Evans

”Reclaiming The Beat is an illuminating collection. Initially, attachment to the illusion of the physical world of form appears predominant. Anger at perceived inevitable loss past and future. The strength of the poetry collection residues in its capacity to evoke contemplation of the invisible mysterious and the possibility of no-thing-other beyond this limited world of form and linear time.” – Jane Fox

“At the heart of Dave Lewis’s latest collection is a journey, peopled by many voices, by the ghosts that refuse to leave. We are always travelling, through emotional, political and physical landscapes, from the valleys of South Wales to Nairobi and the Philippines. The journey is sometimes a sombre one, the terrain rough, coloured by broken promises, depression, lost love or disappointment. But always in the background are those bright, vivid flashes of lyricism and hope which lift the poems away from darker and more intense pieces to make a balanced whole. Above all, Dave Lewis is a storyteller: sharply observant, witty and whimsical, he weaves his narratives deftly round tales of family, friends, and the neighbourhood in which he grew up. His writing, by turns terse or angry, tender or poignant, is always economical, honest, speaking to the reader with clarity and directness: at times his poems have a breath taking photographic precision. A unique voice, this is a collection which will keep you coming back for more.” – Kathy Miles