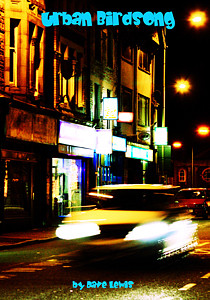 Encouraged by my first success I decided to write some new material. The result was my second book, a short story, prose and poetry collection. Published in May 2010 by Ponty Press, the short story ‘Onions’ (the first short story I ever wrote) won a runner-up award in the Rhys Davies Short Story Competition.

There are two other short stories in the book, a few experimental prose pieces, some poetry and one song. I’m especially proud of this book as it was the book where I attempted to find my voice as a writer. Whether my efforts succeed or not I’ll leave up to you the reader.

‘…the world of Onions is an enclosed one; specifically, a valleys curry-house at a weekend, in which we witness the clash of several disparate cultures, all of which the writer powerfully evokes with the briefest of sketches. The epiphanic moment at the story’s close is expertly done: the headlights of a passing car beam into the restaurant, and ‘the people were lit up, momentarily, clear as diamonds [and] Mohammed could see for the first time in his life’. A remarkably controlled piece of work.’

This book can be purchased as a paperback direct from the publisher for £7.99 (plus postage) or as an e-book on Amazon kindle for £4.99.

not burnt out, well…

his coat was left on a rock

while drinkers and drivers

leave the Rose and Crown

the kitchen knife and

the stomach wounds and

let the fumes out

they joke about it

before they drive home

to tea with the wife

consider this forest closing her arms around you,

in their paradise plumage and kaolin soaked beaks, and squawks

who longed for the forest to feel;

to reveal a brief clearing,

for jaguars and otters,

and a trillion lustrous insects,

the forest could annually bloom; fresh monkeys, and lizards, and spiders,

and tapirs, and rats the size of wheelbarrows?

and the trees stay muffled with soft moss

the forest will gestate with poison arrow frogs and haemorrhagic diseases

loggers and prospectors and rapists…

and will consider closing her arms around herself,

Castles in the Sand

The sight of the cobra drew me in. I had to move closer. Closer to pain. Closer to death. As close as we could possibly be.

The ladder-thin Arab danced around us with a water snake dangling in his hand.

‘Will it hurt us daddy?’

The luminous yellow wristband shone in the February sun – a symbol of captivity. A sign for the others. Belonging. His hair was matted to his head, bubbly blisters burst out on his bald patch. Soaked with sweat, he still craved more of the ebbing rays. And more whisky, local stuff, rough as a sandstorm, cheap as chips. The waiter thought his wife was fat.

There was a stench of sweaty drum skins and people passing by. We were closer now. Drawn in. To the dry scales. Hard and heavy on the sandy floor. Music filled the air – a claustrophobic sound, jingle jangles everywhere. A buzzing white noise.

The piper sat silent, swaying slightly in cream linen, with red buttons on his cotton hat. Time was running out for us. In a few days it would be all over. All gone. Over.

‘The snake is coming closer daddy?’

‘Dave Lewis offers us multiple perspectives in this musical travelogue through a modern Wales and beyond. Honest, raw and mysterious. Just when you think you’ve worked it out a twist, a turn, a sensuous push. This collection is finely honed each word carefully chosen. From the intimacy of family and friends, to lovers and laughable locals a quality of authenticity shines through. The writer’s eye for detail is finely observed and he is never afraid to confront authority head-on. The prose pieces are well crafted and show great range and the final poem in the collection is about as perfect as a poem can get – an absolute masterpiece! Avant-garde? Revolutionary? I’m not sure, but one thing is for certain there is no pretentious bullshit here.’ – Mark Davies

‘A melodic safari through a valleys consciousness.’ – Andrew Davies, The Gallowbirds

‘Dave Lewis’ second collection, Urban Birdsong, is a work of enormous range and scope both in terms of its form and subject matter. A Welsh writer who can move the reader from the local to global, from Merthyr to Monterey, and back again. Shared pain, shared laughter, and we are all as one, and all the richer for the experience. Carefully observed; funny and sad; accessible and illuminating: a must read collection of verse and prose.’ – John Evans

‘Dave Lewis brings together the personal and social in poems and prose set in pubs, fields and bedrooms. From Ponty to Africa, he makes places come alive with both humour and the senses.’ – Mike Jenkins

‘With subjects, settings and situations from near and far, all delivered with a personal and down to earth understanding, I found Urban Birdsong engaging, humorous, insightful and wonderfully emotive too. This book has been written with a natural and positive sensitivity that shines forth throughout it’s contents. A real treat to read, and certainly not a collection that will just sit and go dusty in the bookcase; it is a book that I shall return to over again. I thoroughly enjoyed it!’ – Claire Rees